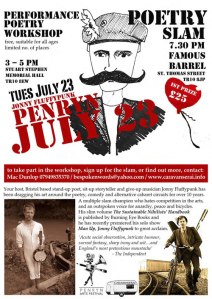 What is a Poetry Slam?

In the beginning was the word, and the word was spoken…

Poetry Slams take place all over the world, and have revitalized interest in poetry.  The spoken word and oral traditions are some of the oldest forms of literature and are still going strong in modern culture.

When Poetry Slams first became popular, some poets in academia found fault with the movement.  Yet Slam was seen to be – especially amongst young poets and poets of diverse backgrounds – a democratizing force. The current generation of spoken word poetry is sometimes political, often humourous, and draws upon racial, economic, and gender injustices as well as current and personal events for subject manner.

A Slam is simply a poetry competition in which poets perform original work alone  before an audience, which serves as the judge. The work is assessed as much on the manner and enthusiasm of its performance as its content or style, and many slam poems are written to be heard, not to be read silently from the page.

The basic rules of a Poetry Slam are:

2)            Each poet gets three minutes (plus a ten-second grace period) to read one poem. If the poet goes over time, points will be deducted from the total score.

4)            Judges are selected from the audience, and those scores are used to determine who advances.

other sites of ours